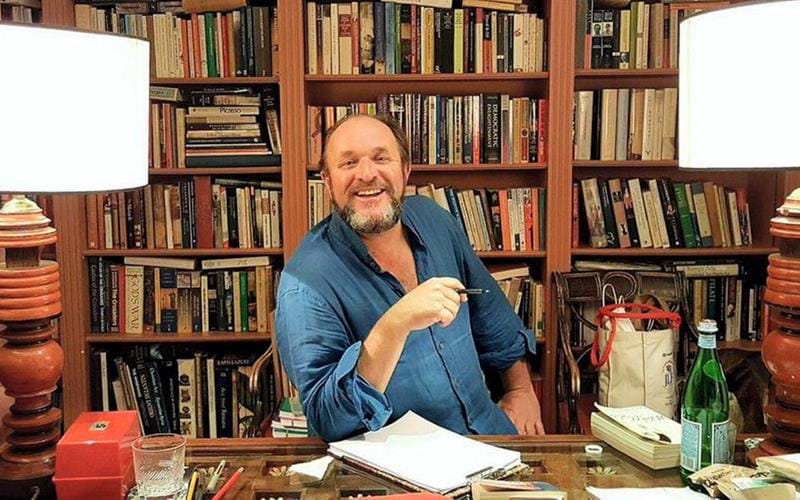 More historian than travel author these days, William Dalrymple was working as a stringer journalist out of Delhi in 1993 when his first book on India – ‘City of Djinns’ – became a best seller. Exploring the many layers of the capital’s history through a mix of personal anecdote, travelogue, interviews and archival research, it pushed back the boundaries of what a travel book could accomplish, bagging the coveted Travel Book of the Year Award and paving the way for an illustrious literary career.

Looking back at William’s output since ‘Djinns’, one thing that shines through is a profound love of India and its culture – particularly the Persian-influenced art and poetry of the country’s courts. Dalrymple is at his best describing the kind of hinterlands often invisible in conventional histories: the miniature painting; the Urdu poetry ‘mehfils’; the dancing, cuisine and costumes; and the extraordinary, hybrid Indo-European lives led by some of founders of the British empire.

He is also a storyteller of uncommon ability, capable of transforming material that in less able hands might be paper dry into something resembling a 19th-century novel, with multiple points of view, and intersecting, suspended narratives that rattle by at a compelling pace.

Here, then, is our own (very subjective) rundown of William’s India oeuvre, rating (in reverse order) his books in terms of their potential to assuage our temporarily suppressed wanderlust over the coming months of social distancing.

You can find out more about and read extracts from the books we've selected by clicking on the thumbnail images below, which will take you to their page on the Amazon website. We’ve set up an Affiliation scheme with Amazon, all proceeds from which will be donated to GiveIndia’s campaign to support day-wage labourers in India adversely affected by the Coronavirus outbreak. For more on this initiative, go to:
https://indiafightscorona.giveindia.org/support-families/

7. The Age of Kali: Travels and Encounters in India

Published in 1998, this collection of essays draws on the period when William was covering South Asia as a young journalist. Its subject matter ranges widely from caste wars in Bihar to the lives of Goa’s aristocratic dowagers, as well as wonderful depictions of cities like Hyderabad and Madurai. Some of the pieces, such as the article on the disappearing Indo-Islamic culture of the Lucknowi Nawabs or the white-clad Widows of Vrindavan, are timeless. Others – notably the interviews with Benazir Bhutto and Sanjay Gandhi – are transformed in the light of future events. But they are all, without exception, beautifully drawn and packed with the kinds of insights into the complexities of the Indian Subcontinent for which the author has since become renowned. Click to buy.

6. Koh-i-Noor: History of the World’s Most Illustrious

Charting its journey from the mines of Galconda to the crown of Queen Elizabeth II, via Afghanistan and the Punjab, this biography of the world’s most illustrious jewel (co-written with Anita Anand) is the perfect introduction to William Dalrymple’s work. For a start, it’s considerably shorter than most of his other books. The subject matter is also eminently readable, romping through a series of political intrigues and colonial wars, interspersed with depictions of the country’s sumptuous royal courts and its rulers (in which the author takes characteristic relish). Along the way you gain some memorable insights into how British power advanced through India in the 19th century. Click to buy

5. Nine Lives: In Search of the Sacred in Modern India

This collection of essays from 2009 describes the lives of nine individuals connected to India’s diverse religious traditions: a Jain nun whose friend ritually starved herself to death; a prison warder in north Kerala who moonlights as a dancer in Teyyem possession ceremonies; a maker of idols in Tamil Nadu who is the 35th in an unbroken family line of artisans; a traditional story teller from rural Rajasthan; a Bengali woman who gives up her life to perform arcane Tantric practises on a cremation ground; and three brothers who follow very different lives as Buddhist monks. Each offers a window on a world unique to India that few outsiders could imagine existed. Click to buy.

Versions of what actually happened in 1857, a calamity traditionally referred to in British histories as ‘The Mutiny’ and in India as ‘The First War of Independence’, have over the century and a half that have elapsed since often been at odds. This book attempts to give a definitive narrative, using the events that unfurled in the Mughal capital, Delhi, as the pivotal point. Forgotten and rarely consulted archives in India and London were used to piece together a picture that illuminates the conflict from both sides, and from the perspective of the individuals involved, from Emperors to lowly sepoys and soldiers. Drawn together with consummate skill, it is a story that’s at times difficult to stomach – the level and nature of the violence, in particular, is profoundly shocking and often hard to reconcile with the sanitized versions that became cemented in the popular British imagination. But this is a book of profound importance, showing the colonial project at its most red in tooth and claw. And no-one else could have brought it off with such aplomb. Click to buy.

3. City of Djinns: A Year in Delhi

William’s first book on India was a revelation, and marked a sea change not only in the way non-fiction was written in the country, but also the way many Indians regarded their past. Phrased as a ‘Year in Delhi’, it weaves together affectionate depictions of life in the capital (back in the early 1990s, when it was a twentieth of the size it is now!) with chapters that peel back the layers of the city’s past to reveal miraculous survivals from long gone eras, whether forgotten colonial mansions or Sufi scholars leading lives little changed since the time of the Mughals. Delhi has changed beyond recognition since this book was written but many of the cultural traditions and monuments it foregrounds endure. Click to buy.

2. The Anarchy: The Relentless Rise of the East India Company

The only question left unanswered in William Dalrymple’s most recent book – a hefty, 576-page history of the East India Company – is why it has taken him so long to tackle the tale around which so much of his previous work revolved. No matter. We’re just glad he got around to it. Because as with ‘The Last Mughal’, it’s hard to imagine anyone else capable of doing such a fine job, teasing out a coherent narrative from such disparate and complex events. As ever, William’s love and deep knowledge of Indian culture and history shines through every page. His background (Dalrymple senior was a military man from the Old School) also serves him well when it comes to describing the chaotic, bloody battles decades. Click to buy.

This was the book that turned William into an international superstar historian. It started life   as an account of the lives of some of the more eccentric East India Company officials who   went “native” in 18th and early 19th-century. But the story switched focus dramatically after   the discovery in an antiquarian bookshop in Hyderabad of manuscripts relating to events   surrounding the marriage of EIC ‘Resident’ (de facto ‘Ambassador’), James Achilles   Kirkpatrick, and a beautiful young Persian noblewoman, Khair un-Nissa. Such love unions   were not exceptional for the times, but this one ultimately unravelled in a way that reflected   the seismic changes taking place in Anglo-Indian relations at the time. Poignant and ultimately tragic, the central story provides the main impetus in this tour de force, but the incidental detail and sketches of life in and the around the Hyderabadi court hold no less fascination. Click to buy.