Lijiang: What to See

The southern Chinese city of Lijiang is a place of two halves, with a picturesque Old Town and ultra modern New Town. The former is a labyrinth of cobbled streets and, despite an earthquake in 1996, is still home to some incredible traditional architecture. No expense was spared by the government in the aftermath of this natural disaster and ruined buildings were reconstructed with faithful adherence to their original designs.

A year later these efforts were rewarded by the United Nations Educational, Scientific and Cultural Organization (UNESCO) adding Lijiang to its list of World Heritage Sites. With so much to see in this beautiful city, it is worth identifying some of the highlights.

Simply wandering down the cobbled streets around the Old Market Square and coming across some of the many canals is an experience in itself. These waterways were traditionally used to furnish the city with drinking water, which needed to be brought in from Yuquan Spring and a number of wells and springs are still used to this day. Notice how they are split into three sections to ensure that drinking, washing fruit and vegetables and rinsing clothes are all done separately. 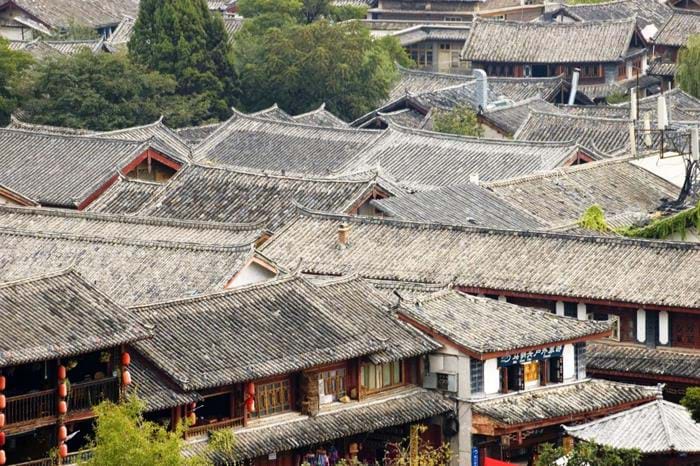 Everything from dried seaweed and yak butter to copperware and tea can be found at this bustling traditional market. It is a fantastic place to explore, even if you don't intend to purchase anything and soaking up the atmosphere as the locals go about their daily business is a great way to feel truly connected with the place.

The Mu Family Mansion, which has its own water wheel on the side, was once the home of a Naxi chieftain and his relatives. Having been originally constructed in 1382, the house was almost completely rebuilt after the earthquake of '96. Inside, visitors will find some information on the family that lived within its walls and the history of the building. For most people, however, it is the beautiful grounds that really stand out at this sight.

While following the typical layout of the Ming Dynasty palaces that were created at the same time, the Mu Family Mansion also incorporates influences from Naxi and Tibetan architecture. The chieftain who lived in the house was responsible for controlling the people and collecting money for the Imperial Court. 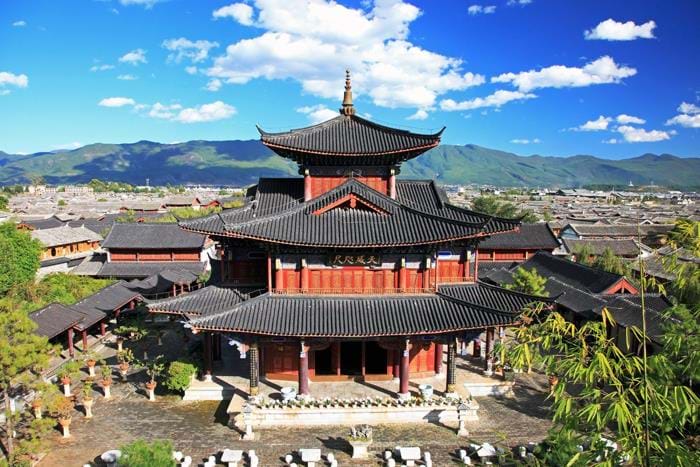 Constructed in 1737 at the foot of Elephant Hill and in the shadows of Jade Dragon Snow Mountain, Black Dragon Pool Park stretches for no less than 40,000 square metres. A decorated archway welcomes people into this public space, with the large pool being one of the main features. In the summer, white Otellia acuminate flowers float on the surface, making the vista all the prettier. Around the water, old chestnut trees have matured.

Within the park are a selection of interesting sights to visit, including the Longshen Temple, the Deyue Pavilion, the Suocui Bridge and the Fayun Pavillion.

Dating back to 1737 and the time when the park was formally laid out, the Longshen Temple is used as a place to make rituals to the gods and pray for rain. This is due to the fact that it is associated with the Dragon God, who is said to be the bringer of rain. It is complete with five courtyards, which exhibit a high quality of planting, with some stunning flowers on display. It is at this temple that Naxi musicians perform their orchestral music each afternoon.

At the centre of the Heilington Pool, the Deyue Pavillion sits majestically, connected to the land by way of the marble Suocui Bridge. The white stone contrasts dramatically with the black curved roofs of the tiered pavilion, which was built in 1876.

Having been built at the Fuguo Temple outside of the park in 1601, the Fayun Pavillion has subsequently been relocated to Black Dragon Pool Park, where it can now be visited. Elements of Naxi architecture have been combined with styles found in Bai, Han and Tibetan traditions. Its three layers and five cornices have been embellished with intricate carvings and colourful paintings. 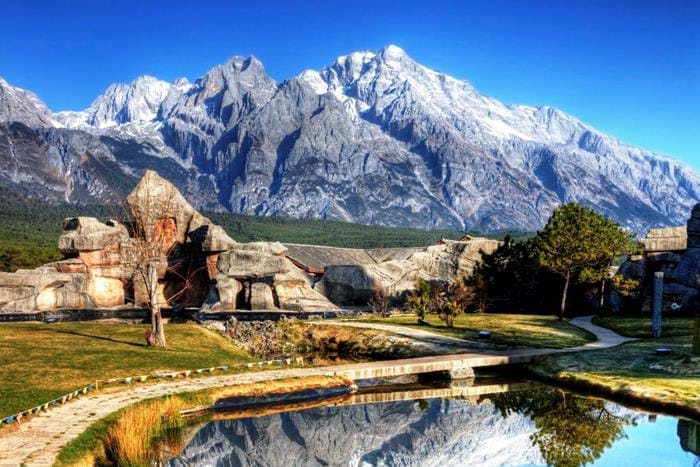