Kyrgyzstan ‘Art of the Nomads’

Experience the sublime landscapes and fascinating nomadic culture of Kyrgyzstan in summer on a special TransIndus group tour, devised and led by Central Asia expert Joan Pollock. The route covers the most rugged, mountainous stretch of the old Silk Road between China and Uzbekistan – a region of sun-lit snow peaks, vast blue-green glacial lakes and pastures dotted with yurt encampments.

Joan has timed the trip to coincide with the annual Shyrdak Festival of Felt Art, where you’ll be able to watch the country’s top artisans craft, and you'll have the opportunity to buy, the finest quality Kyrgyz rugs and carpets. In addition to seeing some of the most spellbinding vistas in Central Asia, you’ll also get to experience life in a genuine nomads’ camp, sample traditional Kyrgyz and Uyghur cuisine, and learn about the region’s Russian colonial legacy through its art and architecture.

Accommodation throughout will be in comfortable, well run hotels and authentic yurt camps set up in beautiful locations. The weather in late-June and early July is optimal, with warm, mostly dry and sunny weather, and night-time temperatures comparable with those of northern Europe. 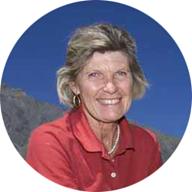 Joan started her career as a nurse, but began working as a guide on trips to Asia in the 1970s, accompanying some of the first organized tours into China and the Soviet Union. Over three decades of travel in many countries since, she has formed longstanding attachments to certain communities, notably the inhabitants of the remote Himalayan valley of Spiti, where she founded a charity focussing on the health and education of children. In 2016, ‘The Spiti Projects’ (www.spiti.org) was awarded a United Nations grant to construct a solar-powered community centre. A fellow of the Royal Geographic Society, Joan is also a keen photographer. A selection of her work appears at www.joanpollock.co.uk.

Itinerary for Kyrgyzstan - Art of the Nomads

On arrival, the group will be met by our local representative and transferred to the hotel, where we’ll spend the remainder of the morning recovering from the journey. After lunch, visit the city’s national square, Ala-Too – a striking example of Soviet-era, Neo-Brutalist architecture. If we’re lucky, soldiers will be slow goose-stepping around the state flagpole as part of the Changing of the Guard ceremony.

Today we’ll continue our sightseeing in Bishkek with a visit to the Museum of Fine Arts, which holds a splendid collection of felt rugs and paintings. Later we’ll continue to an embroidery workshop and bustling Osh Bazaar – the city’s main source of fresh produce, as well as old-style ‘ak kalpak’ hats and painted shepherds’ trunks. 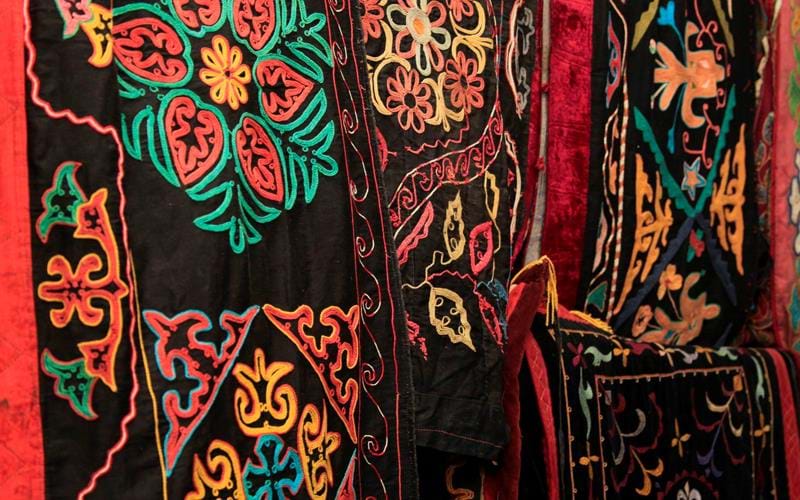 A busy day today as we leave the capital for Cholpon Ata, on the northern shores of Issyk Köl Lake. En route, the group will pause at the iconic Burana Tower, sole surviving vestige of an ancient Silk Road city. Dotted around it is a superb a collection of 1,500-year-old ‘balbals’ (anthropomorphic gravestones carved by Turkic nomads) and much older petroglyphs. We’ll arrive at Cholpon Ata in time for a quick tour of the excellent Nomad Museum before supper. 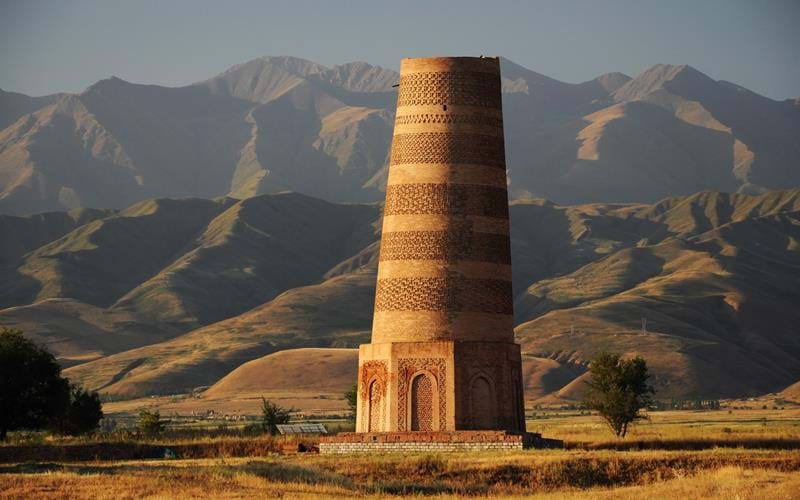 The morning’s focal point will be a visit to Cholpon Ata’s famous petroglyph garden, an impressive archaeological site scattered over a 42-hectare boulder field above the lake. Among the rocks are an incredible assemblage of prehistoric stone circles, tombs and grave markers, as well as the petroglyphs themselves. This unique site spans an estimated 2,500 years of human ritual art. Afterwards we’ll continue on to Karakol. 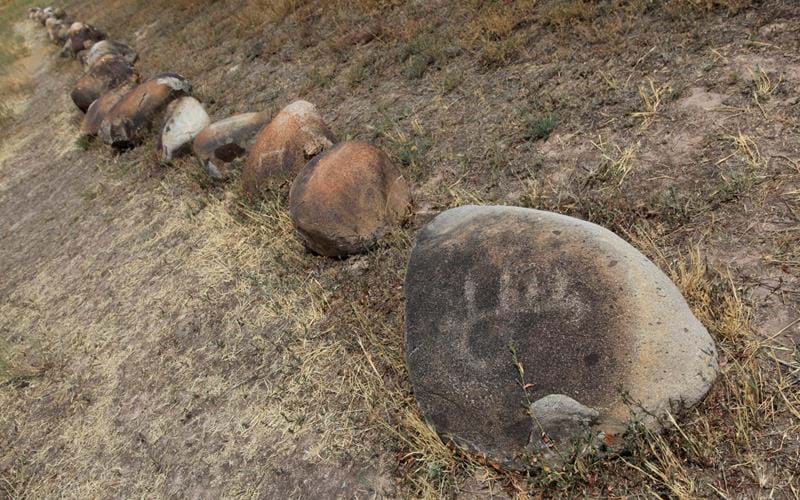 Dating from the late-19th century, Karakol’s architecture vividly reflects its Russian roots and over the course of the day we’ll see some striking vestiges of Tsarist times, foremost among them the town’s onion-domed Holy Trinity Cathedral. Another highlight is a well-curated museum dedicated to the explorer, Nikolay Przevalsky. We’ll also drive out to the Jety Oguz valley to see the ‘Seven Bulls’, a row of spectacular blood-red crags framed by a backdrop of snow-streaked mountains. In the evening, the group will attend a cooking demonstration and supper with a local Uyghur (Chinese-Muslim) family.

An activity-rich day begins with a drive along the southern shore of Issyk Köl lake to the impressive Barkskoon Valley, where we’ll pause for a short, 15-min walk to a waterfall before continuing on to Bokonbaevo to watch a display of eagle hunting. Afterwards, the group will visit a local felt maker and, in the evening, try our hand at making and baking Kyrgyz flatbread.

This morning we head towards Kyrgyzstan’s handicrafts hub, Kochkor. On the way, the bus will stop at Kyzyl-Suu village to visit a yurt workshop where we’ll be shown how nomads’ tents are made and assembled, then continue to a felt making centre to watch traditional Kyrgyz rugs and ‘elechek’ hats being created in time-honoured fashion. Accommodation will be in a local homestay.

Today we’ll drive to Naryn, a market town on the former Silk Road crammed on to the floor of a sheer-sided valley. In the afternoon you’ll be at leisure to explore the town at your own pace, and perhaps visit the local museum. Later the group will be treated to a traditional Kyrgyz supper of ‘besh-barmak’ (meat broth) and ‘boorsok’ (a type of fried dough). 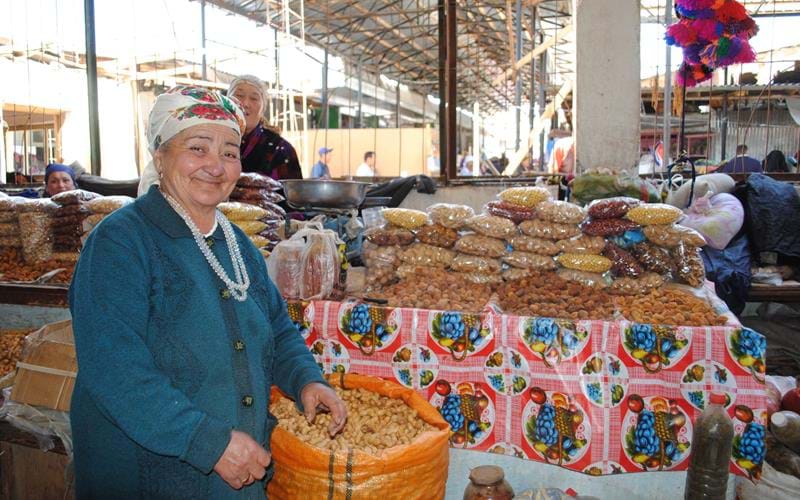 A highlight of the trip awaits today as we visit the annual Shyrdak Festival in the village of At-Bashy. ‘Shyrdaks’ are the traditional felt rugs made by Kyrgyz nomads from sheep’s wool. You’ll see literally hundreds of them for sale, with a broad range of contrasting colours, patterns and styles. Some of the finest makers in Central Asia will be demonstrating their art, making this the best souvenir shopping opportunity of the tour! 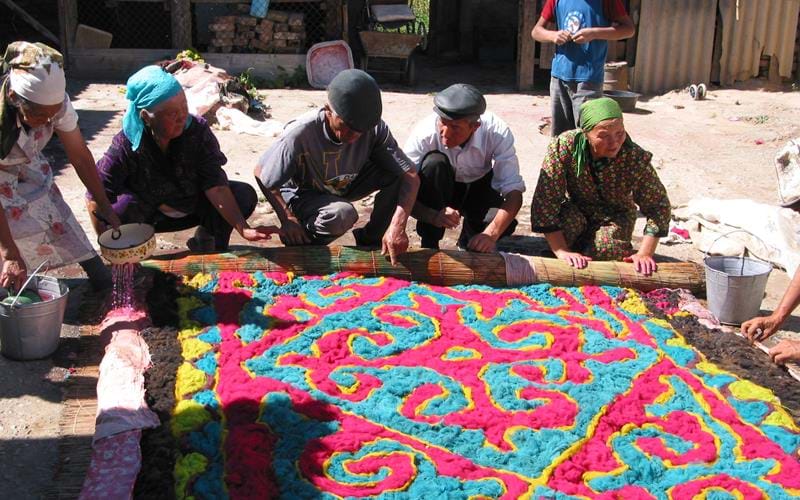 A memorable drive after breakfast takes us over the picturesque Moldo-Ashuu pass to Song Köl, a high-altitude lake enfolded by expanses of grassland and snow peaks. We’ll be spending the night in one of the seasonal camps opened on its shores during the summer months by local nomad families, which will enable us to experience the unique atmosphere of the lake at different times of day. 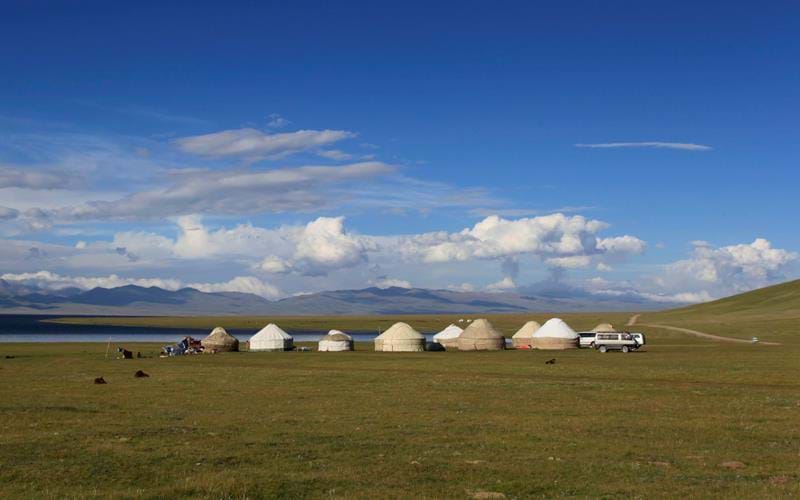 The group will have a full day today to savour Song Köl’s wonderful views and sample life in a Kyrgyz yurt encampment. You’ll have the opportunity to share mealtimes with nomad families, help out with the herding and take a short ride on horseback. At some point, guests are also sure to be offered the famous local delicacy, fermented mare’s milk (‘kumis’).

An unforgettable road trip through a landscape of epic proportions takes up most of the day, as we drive north from sleepy Song Köl to Bishkek over the great Ala Too mountain range. Your journey will culminate in a lively performance of Kyrgyz folk music and dance in the evening. 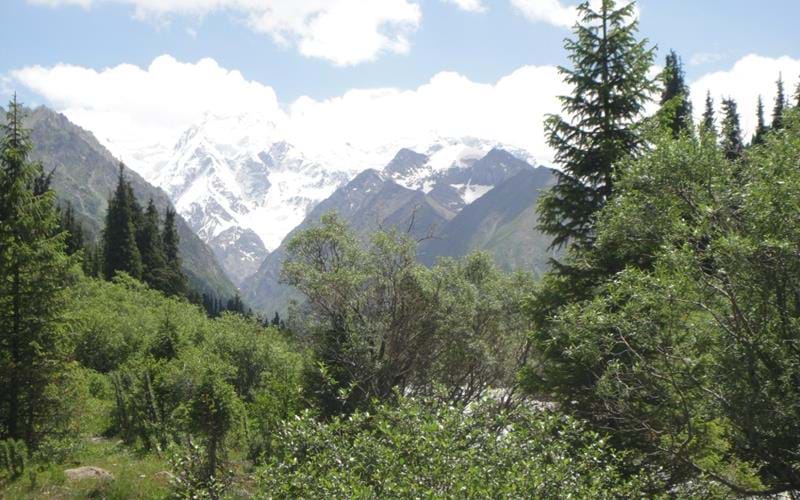 Today is a free day and you can enjoy the sights and sounds of Bishkek or relax in your luxury hotel.

Shortly after breakfast, the group will transfer to the airport for our return flight to the UK, where we’ll arrive shortly before 5pm GMT.

✓   All guided sightseeing noted on the itinerary

✓  Breakfast in Bishkek and half board elsewhere

Optional Single Supplement is £299 per person

2022 tour prices for Kyrgyzstan - Art of the Nomads

Add Extension to the Tour   No

A city of wide, tree-lined boulevards and marble-fronted municipal buildings, Bishkek retains the feel of a Soviet-block capital circa 1990, though it makes an engaging place to fi…

At the eastern end of Issyk Kul, Karakol was created at the end of the 19th century as a Russian military garrison town, and is today the region’s main hub. A sleepy grid of down-a…

This high-altitude lake in central Kyrgyzstan is one of our very favourite destinations in the region – a spot that has everything you come to this part of the world to see, in abu…

Balasagun and the Burana Tower

Rising from a grassy plain against a backdrop of windswept ice peaks, the Burana Tower in the Chuy Valley forms a superbly iconic spectacle. The remains of a minaret that once stoo…

Trekking and Horse Riding in Kyrgyzstan

For the most vivid experience of Kyrgyzstan’s dramatic mountain landscapes, it pays to venture away from road level and up to the remote ‘jailoos’ where the region’s nomads look af… 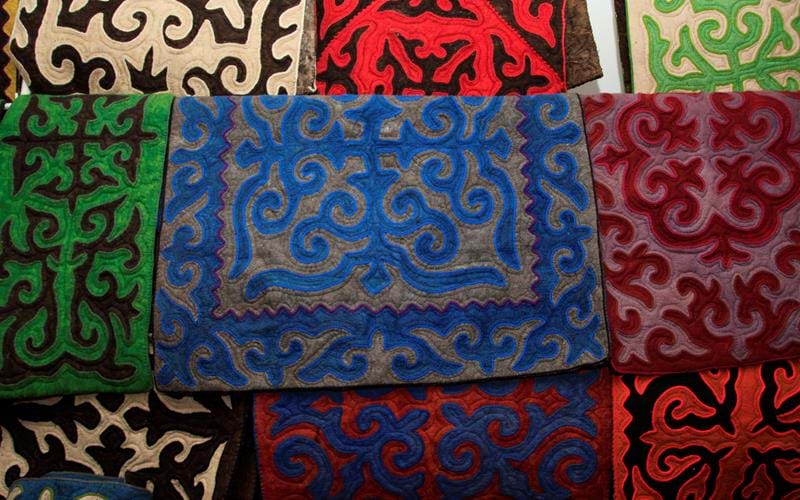 The collectivization policies of the Soviet era had a devastating impact on the Kyrgyz way of life. Some aspects of the old culture, however, are enjoying a renaissance thanks to t…

One of our absolute favourite tours in Asia is this adventurous route trip through the wilds of Kyrgyzstan. It involves a memorable, and at times… 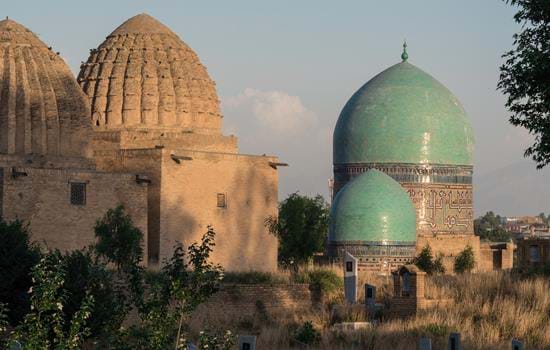 Follow in Marco Polo’s footsteps on a journey from the imperial heartland of China’s eastern seaboard to the dry, dusty capitals of Central Asia –…