I’ve always taken issue with the opening lines of TS Elliot’s The Waste Land. For me, February, not April, is by far ‘the cruellest month’. Winter at this time of year often feels like it has more than outstayed its welcome. Thankfully, there are compensations around the corner in the form of the first spring flowers  – a source joy the Japanese understand, and celebrate, like no other nation at this time of year.

In a few weeks’ time, avenues of cherry trees will erupt across Japan into a blaze of delicate pink. Tens of thousands of people will pour through the parks of Tokyo and Kyoto to savour the spectacle of blossom petals falling like snowflakes from the trees.

In the Land of the Rising Sun, cherry blossom – ‘sakura’ – is much more than mere eye candy. Symbolizing the fragile beauty and fundamental transience of life itself, it is a central trope of Japanese philosophy and culture. From the 8th century, and probably long before, the imperial élite used to gather in the emperor’s orchards to marvel at the blossom, holding sumptuous picnics at which specially composed music and haiku poems would be performed, eulogizing the bitter-sweet beauty of a sight that lasts for such a short time and yet seems to represent everything that is most wondrous about the world.

Today, appreciation of the phenomenon – an activity called ‘hanami’, literally ‘blossom watching’ – is a national obsession. Special sakura forecasts chart the spread of the flower line as it advances north from the Okinawa Islands in February, crosses Honshu in March and arrives in Hokkaido sometime in early May. Weeks in advance, stores create special window displays and fashion houses release garments in soft pink. Even food and drink manufacturers jump on the band wagon: Pepsi produces a sakura edition of its fizzy drink, while Starbucks serve lattés sprinkled with cherry petals.

The traditional way most modern Japanese enjoy the sakura season is by picnicking under the trees while they’re in full bloom, or when the petals are falling. The peak of the hanami picnic season in the capital Tokyo comes in late-March, when hundreds of thousands of people mill around the floral avenues in the capital’s parks, sitting under the trees on tarpaulins, sipping sake and eating special sakura bento boxes, the ladies in their finest silk kimonos and their husbands drunkenly singing into portable karaoke machines. It’s a joyous occasion and an uplifting one to share as a visitor. Essential pieces of kit if you want to fit it: a smart phone and selfie stick! 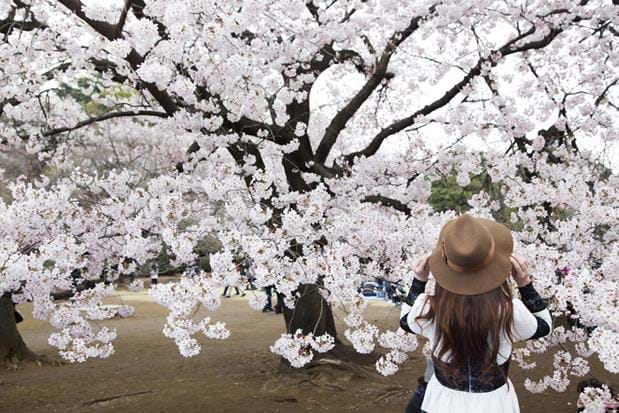 As well as hosting some of the country’s most important Shinto shrines and museums, Ueno Park in the Japanese capital, Tokyo, is among the oldest-established places to enjoy the sakura season. Vast crowds descend at its height to enjoy the spectacle of over a thousand trees in bloom. 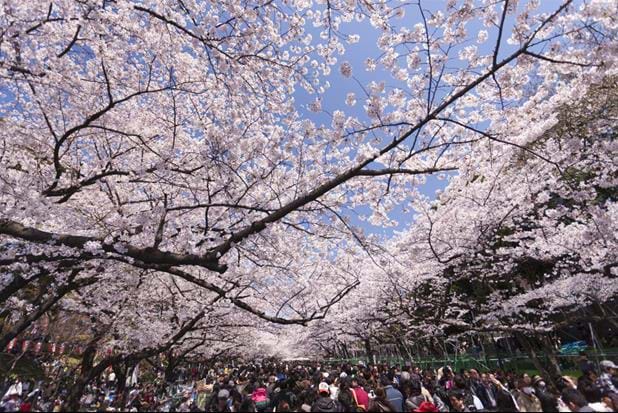 This exquisite formal garden, although only a stroll away from the bright lights of the Shinjuku shopping district, offers a sedate, dreamy alternative to Ueno Park, with around 1,500 cherry trees lining immaculately clipped lawns and pretty rock gardens. 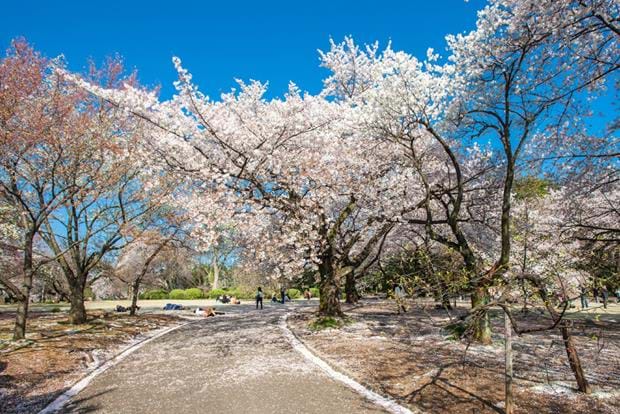 The arty district in south-central Tokyo is famous for sakura-lined canal, where local bars and restaurants place tables for scenic wining and dining. After dark, the trees are illuminated with traditional Japanese paper lanterns – perfect for a romantic saunter.

Japan’s cultural capital is the place to come for some serious sakura worship. Entered through the beautiful, red-lacquered Yashaka Shrine, Maruyama Park is the principal target for hanami picknickers during peak season. Its most photographed feature is a giant, weeping cherry tree, in front of which women dressed in fabulous silk kimonos pose for photos. Other must-see locations for blossom lovers include the Kamo River, whose banks are lined with mature sakura trees, and the grounds of the Kyoto Gosho (Imperial Palace Park). Another favourite of ours is Shimbashi, one of the prettiest streets in the old pleasure district of Gion; at its far west end, lines of cherry trees form a spectacular tunnel, floodlit at night. 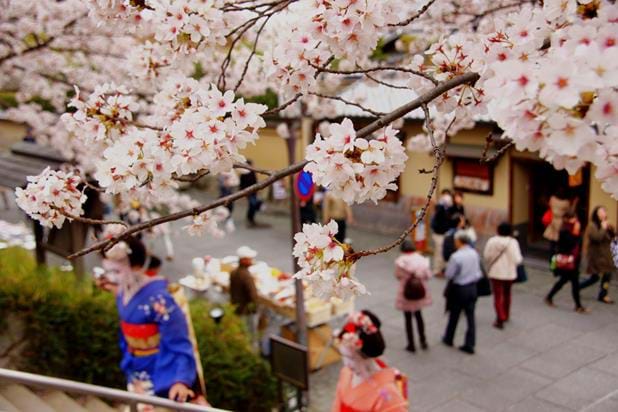 Japan’s most famous landscaped garden is a classic hanami location, where the sakura bloom usually starts sometime in early April. It’s also large enough to soak up the crowds of picnicking flower fans that gather here on weekends. 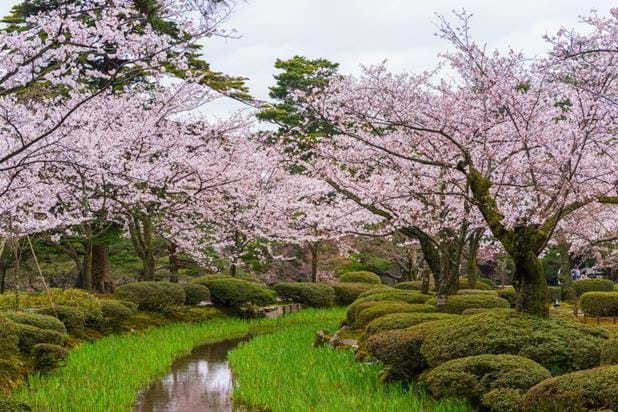 On the northern tip of Honshu, Hirosaki is (along with Mt Yoshino and Takato Castle) regarded as one of the country’s top three places to see cherry blossom. Set against a backdrop of snow-capped mountains, the old citadel soars above an achingly beautiful froth of sakura blooms in April. The trees are skilfully pruned to produce between 5 and 7 bud per flower, rather than the usual three or four, which creates a more intense spectacle. 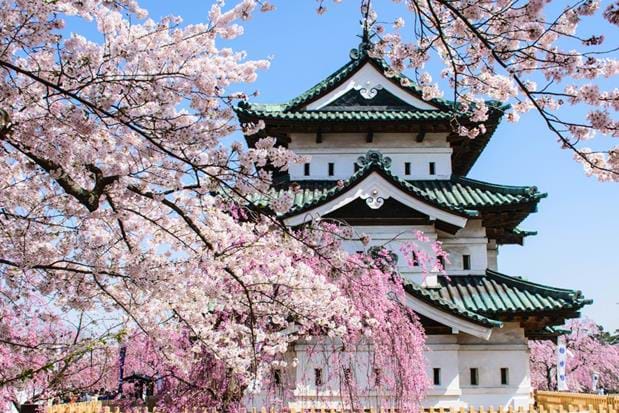 On the sacred Kii Peninsula outside Nara, Mt Yoshino has for centuries been acclaimed for its cherry blossom. Over 4,000 sakura trees have been planted on its slopes at different altitudes, enabling pilgrims to enjoy the flowers at different times of the season. The most beautiful encircle the shrine on the mountain’s summit. 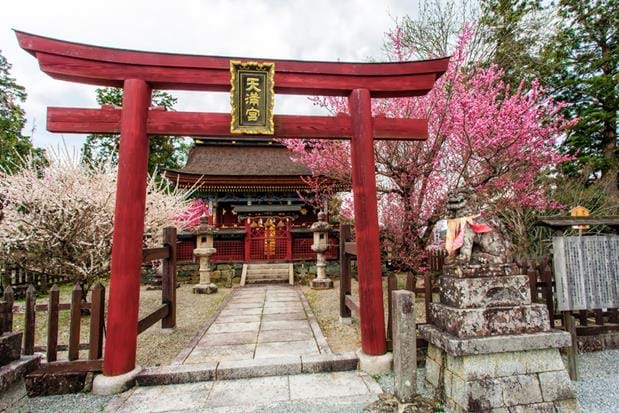 Flowers of the particularly pretty Kohigan variety abound in the grounds of Takato Castle, 60km south of Matsumato. Each year, a fun fair opens in the park to cater for the many locals who flock here to admire the blaze of colour, held to be among the top three of its kind in Japan. 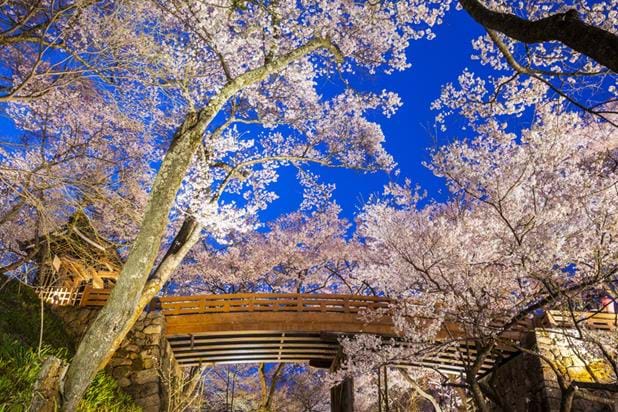 Japan’s northernmost island hosts the last gasp of the sakura season. Parks and gardens in the capital, Sapporo, are crammed with cherry trees under which the locals congregate to imbibe the city’s eponymous beer, while further north and east, the fruit-growing belt is ablaze with blooms between mid- and late-April. 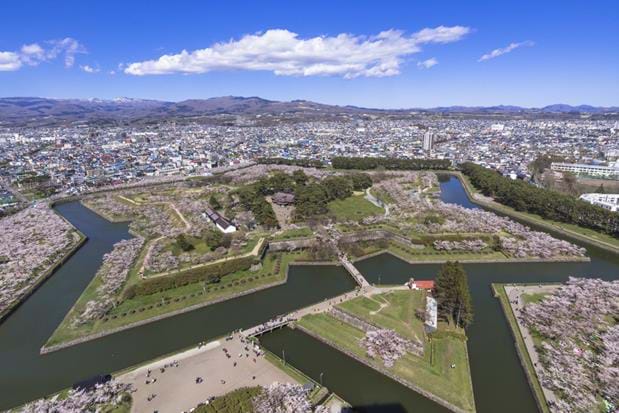 Experience Japan’s cherry blossom season next spring on our fabulous ‘Romantic Japan’ tour, which takes in a succession of ‘sakura’ hotspots and picture-book landscapes, ranging from snow-capped Mt Fuji to the dazzling turquoise bays of the Okinawa Islands – the Far East’s own Hawaii. 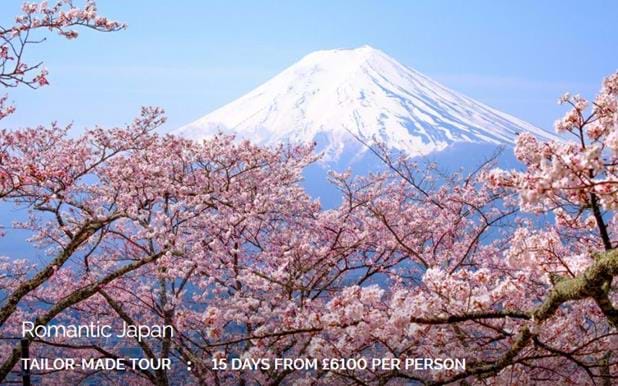 For more information about the cherry blossom tours we operate, or the rest of our tailor-made tour programme, contact our team to start planning your trip. 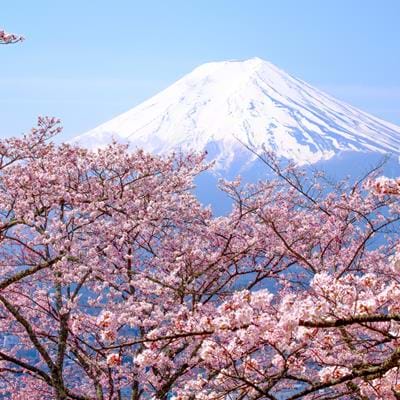