The magnificent temples complexes of Angkor soak up the lion’s share of visitors to Cambodia, but there are other Khmer ruins hidden in the forests further north where you won’t have to rub shoulders with your fellow tourists.

It literally made me gasp.

My first glimpse of the great Khmer pyramid, rising like a vision from an HG Wells novel, was a revelation. Miles from anywhere in the depths of the forested Cambodian Plain, Koh Ker stands a couple of hours’ drive northeast of Siem Reap, at a site that served as a dynastic capital in the early 10th century, but is now all but forgotten.

I pause to line up a photo. If this were Angkor, the place would be crawling with visitors like me at this hour. Instead, only a couple of travelling companions embellish the mid-ground – just enough to convey the sense of scale, but not detract from my enjoyment of the place.

Call me anti-social, but this is how I like my ruins: smothered in tropical vegetation, with no-one else around, and the aura of mystery and antiquity gloriously intact.

We climb the long flight of wooden steps leading to the platform at the top of the temple. The view is amazing. In every direction, fields and treetops merge with the distant horizon. A plume of pale-grey smoke rises from an invisible village nearby, accompanied by the crowing of a cockrel.

Over the next three days, with our TransIndus guide and driver, we explore half a dozen sprawling, remote Khmer ruins and were astonished to find nearly all of them deserted, save the occasional monkey or local villager foraging for wild herbs and firewood.

Each site had its own unique wonders: sensuously carved apsaras dancing over the bases of collapsed towers; exquisite patterns framing doorways leading to jumbled piles of masonry; friezes showing royal processions, rituals or mythological scenes plastered with moss and pale yellow mushrooms. Any one of these temples would have been a Big Deal back home – carefully cordoned by English Heritage, and fixtured with barriers and interpretative panels. Here, they look pretty much as they would have when French explorers re-discovered the sites in the 19th century.

Angkor is magnificent. I’ve been a couple of times and hope to return at least a couple more. It’s the kind of place you can never tire of exploring. But these days, half the world seems to feel the same way. So if you want to experience Khmer ruins without the crowds, you have to travel that little bit further. And believe me, it’s worth the trouble. In ten years’ time, these places will probably be teeming too, so see them while they’re still wild.

Here’s a roundup of the four temple complexes we loved the most in northern Cambodia. For more information about them, contact TransIndus’s specialist consultant, Gary Meynell, who put our tour together and knows the region inside out. 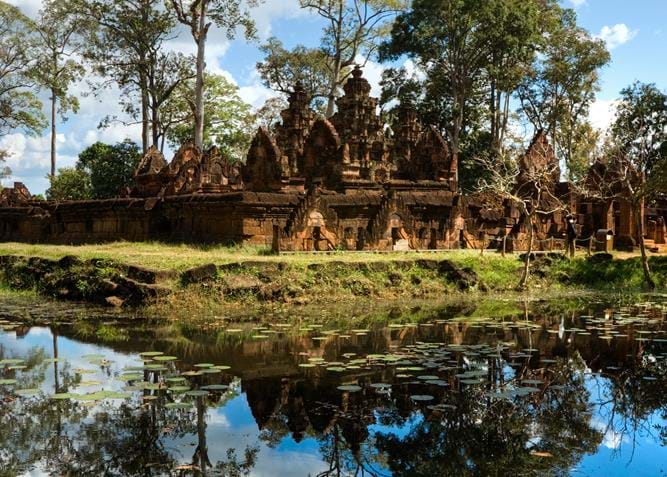 Made of salmon-hued sandsone, Bantay Srei, 17 miles (27km) north of Angkor Wat, impresses less by its scale than the great artistry of its carvings. Delicately sculpted scenes from Hindu mythology embellish the ornate shrines of the temple, dedicated to the God of Destruction and Preservation, Shiva. The real showstealers here, though, are the voluptuous female deities standing in intricately framed niches around the base of the main sanctuary towers. Swathed in diaphanous silk, the figures are decked from head to toe in exquisite jewellery. We visited Bantay Srei in the late afternoon, when the warm light turned the sandstone a molten red colour – fabulous! 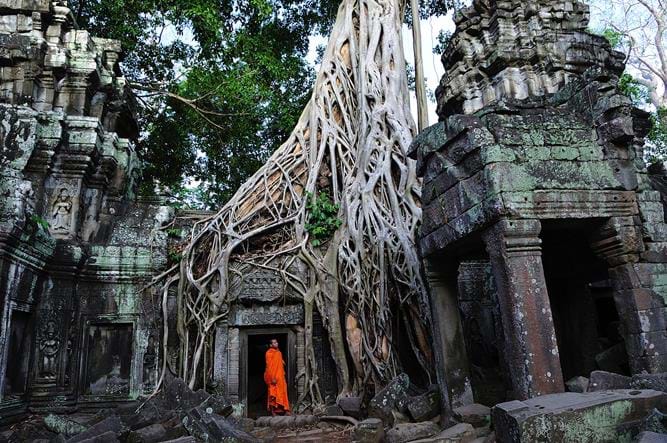 Koh Ker’s Prasat Thom temple (described above) rises in awesome fashion from the jungle, its platforms draped in weeds and sides streaked by rain wash. A flight of steps leads to the top for a spectacular view over the surrounding countryside.

For the full Indiana Jones experience, Beng Mealea is hard to beat. Here, the forest is still king: buttressed-root trees grow behind elaborately sculpted door lintels and the smiles of apsara maidens are glimpsed behind curtains of leaves – all achingly poignant, and splendid. 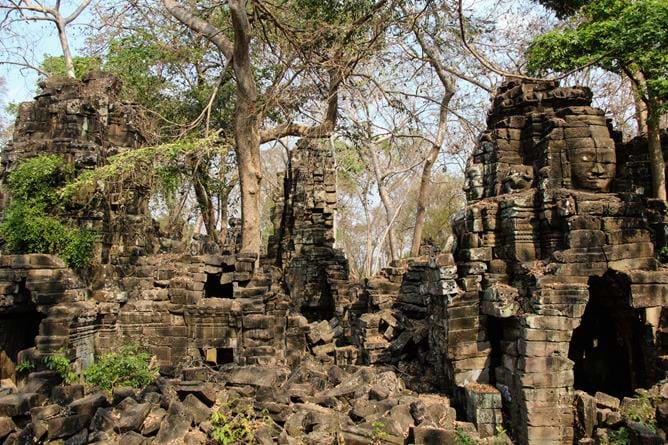 Barely a couple of thousand visitors each year make it to this fabulous Khmer site in the far north (compared with the 5 million who travel to Angkor), but it ranks among the most extensive and impressive in Asia. Having been cleared of mines and partly renovated by archeologists, the site re-opened in 2014. A paved road to nearby Sisophon was opened the following year, and the crowds are sure to be hot on its heels. 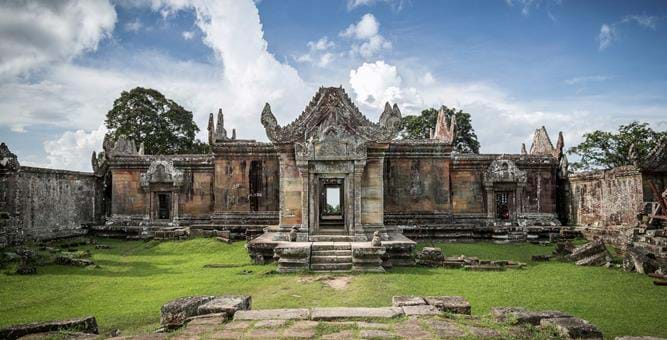 This wonderful temple in the far north of the country occupies a truly astonishing position, scattered over a high plateau in the Dangkrek mountains, overlooking a vast chequer-board of rice fields and palm jungle.

The temple was originally founded in the 11th century but substantially enlarged in the 12th during the reign of Suryavarman II (the king responsible for Angkor Wat). Approached by a long flight of stone steps, it’s divided into a series of walled enclosures, each one entered via a grand ornamental gateway. The clifftop’s easily defensible position ensured it witnessed bouts of fighting during the wars of the 1970s, and one of the most notorious atrocities of the war took place here, when the Thai government literally pushed 42,000 Cambodian refugees off the escarpment’s edge. Those who survived had to cross three miles of minefields before reaching the relative safety of the Vietnamese (their enemy’s) lines. 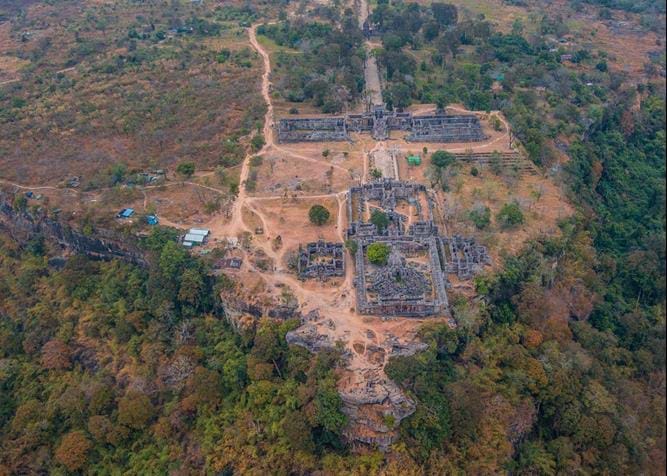 Three of the temples featured in this article appear on one of our suggested ‘Private Journey’ tours, which you can view by clicking here 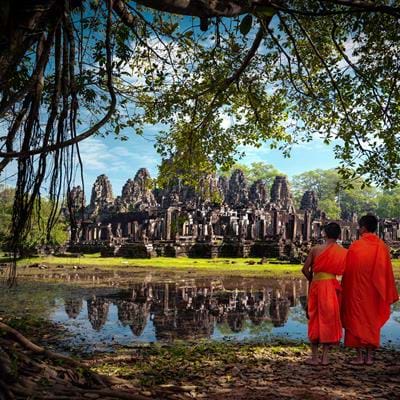 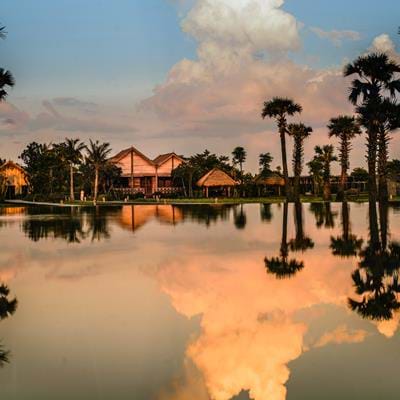 Our Top Three Hotels in Siem Reap for 2018