This is one of the least visited regions of India, but one rich in heritage, culture and interest. In the course of a highly varied fortnight, you’ll explore the most charismatic of India’s four great mega-cities, Kolkata, attend Hindu rituals at the Kalighat temple near the banks of the Ganges and marvel at the pomp and splendour of more recent British monuments. Up country, traditional Bengali culture takes centre stage as you visit the university founded by Nobel laureate, Rabindranath Tagore at Shantiniketan, then explore the ruins of the huge, prosperous cities that flourished on the establishment of British rule after the Battle of Plassey in 1757. Further north, the hill station of Darjeeling, with its tea gardens and breathtaking views of the Himalayas, epitomises the more gentile side of the Raj.

On arrival in the morning, you’ll be met by your TransIndus driver and guide, and escorted to your hotel for a two-night stay. Spend the remainder of the day recovering from the journey, perhaps venturing out to the College Street Coffee House as an acclimatiser.

One of our favourite places to get accustomed to the city’s distinctive ambience is the College Street Coffee House on Bankim Chatterjee Street– a favourite hangout for Bengali intellectuals and artists. Grab a table under one of the paddle fans, order a dosa and masala chai from one of the turbaned waiters and you’ll soon be drawn into the local ‘adda’, or chit-chat.

A full day’s sightseeing today starts with an early morning visit to the wholesale flower market at Mallick Ghat. Wind your way through the heaps of marigolds and jasmine blooms, then climb the steps up nearby Howrah Bridge for a wonderful view over the city.

Today’s tour covers most of the city’s must-see sights, including the iconic Victoria Building on Kolkata’s Maidan, the Indian Museum’s famous collection of antiquities, the Writers’ Building and Park Street Cemetery, where an evocative collection of 18th and 19th century Gothic tombs recalls the early days of British rule. In the early evening, drive across town to the Kali Ghat temple, dedicated to a black-faced incarnation of the Goddess Durga. The temple is the most important Hindu shrine in the city. Raucous crowds attend rituals here from dawn til dusk, forming snaking queues in the temple precincts as they wait to fling hibiscus flowers at the three-eyed, gold-tongued deity in the main sanctum.

Drive north to Bishnupur for an overnight stay, visiting the Terracotta Temples in the afternoon. 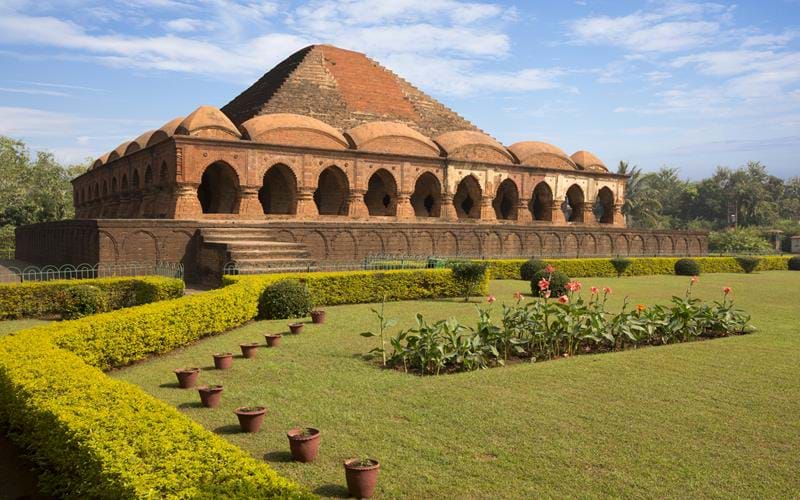 Some of the most beautiful and richly embellished temples in eastern India are to be found 93 miles north of Kolkata at Bishnupur, former capital of the Malla Rajas. Made of laterite stone and brick faced with finely carved terracotta, the temples take their cue from the form of simple Bengali village huts, whence their gracefully arched chala roofs. Tiles around the bases of the shrine depict scenes from the Hindu epic, as well as intricate floral motifs.

En route to the Shantiniketan, the University founded by Rabindranath Tagore, you’ll stop at Panchmura to visit a workshop where local folk deities are fashioned out of terracotta. 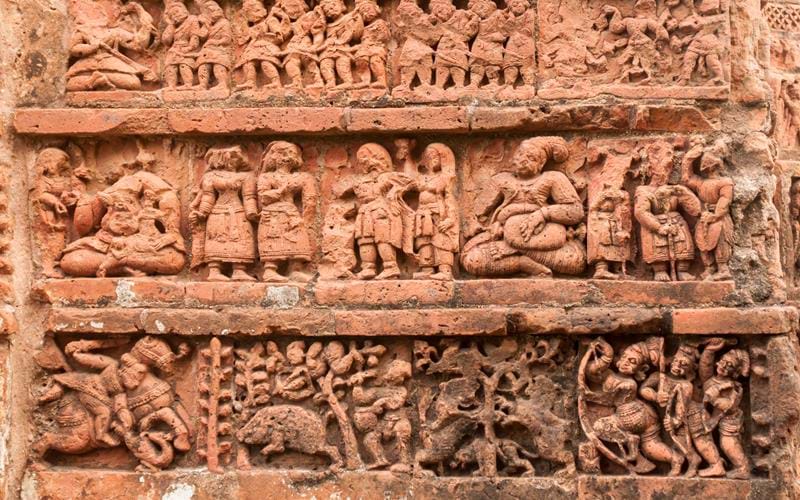 First stop on today’s tour is the market town of Bankura. Nearby Panchmura is renowned as a pottery centre where Hindu deities in the shape of horses and elephants are made from terracotta. Showrooms in the market displaying ranks of the figures make great photo opportunities.

Founded by Rabindranath Tagore in the early 1900s, Vishwa Bharati in Shantiniketan was created as a kind of crucible of Bengali culture. Classes in singing, painting and music take place under the trees in the grounds – one of the region’s defining spectacles.

Visit Vishwa Bharati campus today, enjoying the distinctive Bengali atmosphere of its buildings and open-air classes under the trees in the grounds – one of the region’s defining spectacles.

The university holds numerous buildings decorated with fine sculptures, paintings, murals and terracotta work by renowned Bengali artists. The spiritual focal point is the Upasana Griha, a glass-walled chamber that looks especially wonderful on Wednesday evenings when bhajan-singing sessions take place inside it. Music is very much a part of everyday life here, and if you’re lucky enough to be here on Saturday afternoon, after the local market ends, you’ll see groups of Bauls – mystic minstrels distinguished by their saffron clothes – gather beside the canal to play and sing.

Tarapith is a temple town famed across Bengal for its Tantric shrine and adjacent cremation ground, a gathering place for red-robed Aghori sadhus. 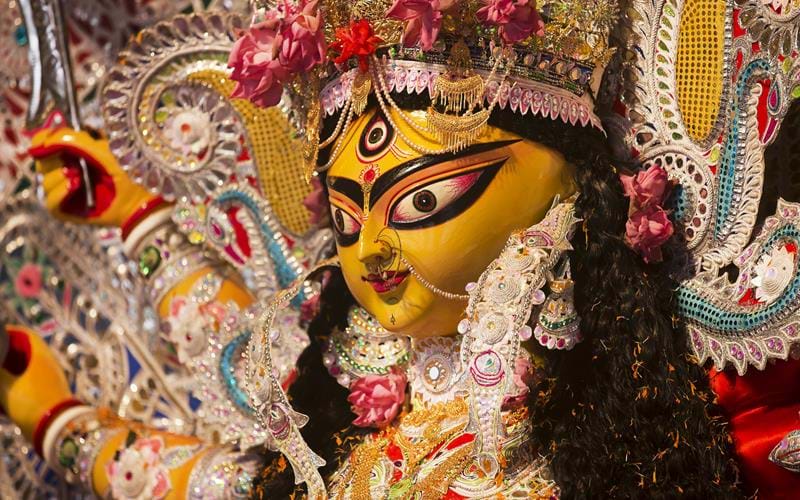 Aghoris are a Tantric order of sadhus whose ritual practises include smearing their bodies with ash, drinking blood from skulls and eating human flesh. They believe that breaking taboos in this way helps them transcend illusion and attain knowledge of the Absolute. At the cremation ground in Tarapith, next to the temple, a small community of Aghori live in huts scattered around a Banyan grove. Contrary to their popular image, they’re rather docile, spending most of their lives high on cannabis – the drug is closely associated with the worship of Shiva throughout India.

Drive to Berhampur today to visit the palace at Murshidabad, which in the mid 18th century was a large and prosperous city, far larger than Kolkata.

The flat, riverine countryside of central Bengal to the north of Kolkata holds the remains of numerous lost cities dating from before the time of the British. Grandest of them all is Murshidabad, capital of Murshid Quli Khan, the First Nawab of Bengal, who took control of the region after the death of the Mughal Emperor Aurangzeb in the early 18th century. Numerous mosques, tombs and gardens survive on the site, but its crowning glory is the vast, Georgian-style Hazarduari Palace, whose great Neoclassical façade rises in spectacular fashion from the banks of the Bhagirathi River.

Visit the archaeological sites of Gaur and Pandua today, near the town of Malda (the ‘mango capital of Bengal’), where you’ll be spending the night.

Gaur holds the remains of several cities that prospered on this stretch of the Ganges for over a thousand years before the arrival of the East India Company. The ready source of basalt stone in the nearby Rajmahal Hills provided material for the impressive mosques whose remnants today tower rise above the surrounding mango trees.

Nearby Pandua is the site of what was, in the late 14th century, India’s largest mosque – a vast building modelled on the Great Mosque in Damascus, retaining dozens of domes and a vast façade.

Take an early train to New Jalpaiguri then drive from there on to Darjeeling, where you’ll spend three nights. 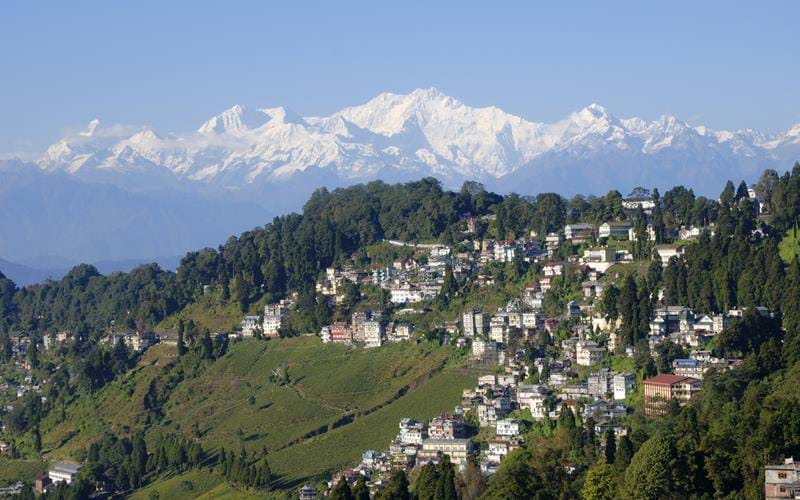 It’s not hard to understand why the British chose Darjeeling as the site of an army sanatorium back in the early 19th century. Dense oak and sal forest cloaks the high, undulating ridge on which the hill station was founded, at a refreshing altitude of 2,200m. For much of the year, the skies remain blue and air blissfully cool. Whole hillsides of lush tea gardens carpet the surrounding slopes. Visitors travel here to watch the pluckers at work amid the terraces, to marvel at the rhododendron flowers in the botanical gardens, and enjoy the old-world atmosphere of the town itself, with its mock-Tudor bungalows and Gothic churches.

An early start today to reach the top of Tiger Hill (2,585m) shortly after dawn, when the skies are most likely to be clear, revealing a superb panoramic view of Kangchenjunga and the northeast Himalaya. Afterwards, visit Ghoom Monastery and, time permitting, a tea plantation. 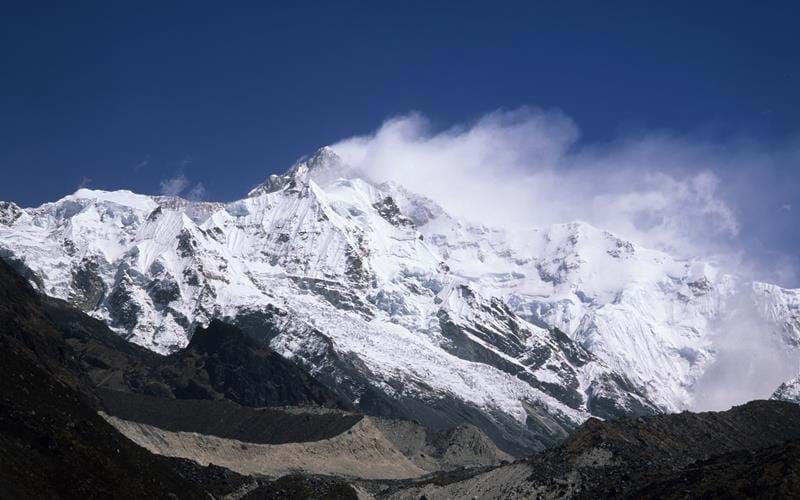 The top of Tiger Hill offers a truly extraordinary panoramic vista, extending from the plains bordering Bangladesh in the south to the summits of Lhotse, Makulu and Everest in the west, and Kangchenjunga to the north. Few viewpoints in the world encompass a comparable span, though you’ll need to be there shortly after sunrise to see it in all its glory.

Ghoom Monastery is the day’s other highpoint. Its centrepiece is a particularly beautiful bronze-faced Maitreya, the ‘Buddha to Come’.

Visit the Himalayan Mountaineering Institute today, and take a ride on the world-famous Darjeeling railway to Kurseong. 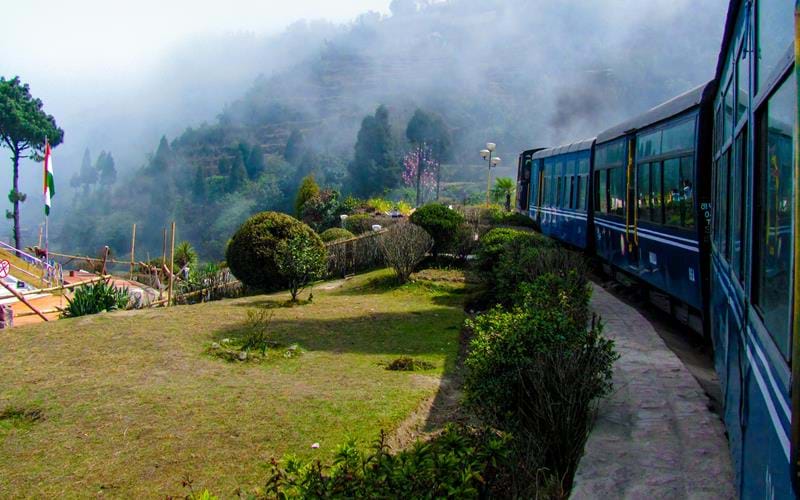 An exhibition detailing the history of Himalayan mountaineering forms the core of the illustrious training institute in Darjeeling, where Sir Edmund Hilary’s climbing partner Sherpa Tenzing Norgay, was the once the director. Anyone interested in the sport will enjoy seeing the amazing extent to which equipment has evolved over the past sixty years!

No visit to Darjeeling is complete with a trip on the glorious little Himalayan Railway, a narrow-gauge line built by the British at the end of the 19th century, and the only one in India that still uses steam locomotives. Kurseong provides the perfect target for a short taster ride. You’ll be met at the station and driven back to your hotel in town.

Take the lunchtime flight back to Kolkata, where you’ll be spending your final night in India.

It’s time to bid farewell to Bengal as you drive to the airport to catch your flight back to the UK via the Middle East. You’ll arrive in London the same day. 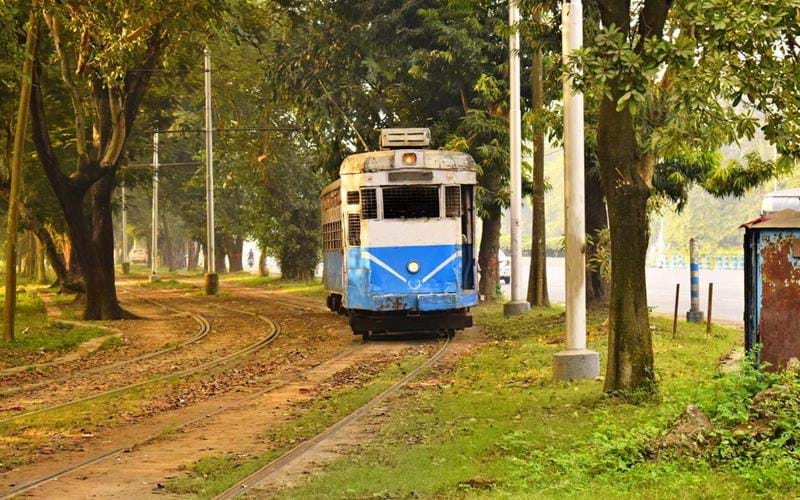 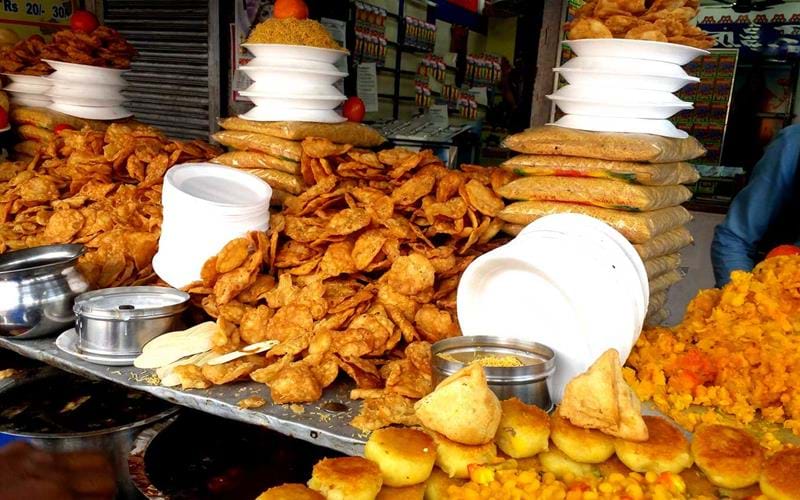 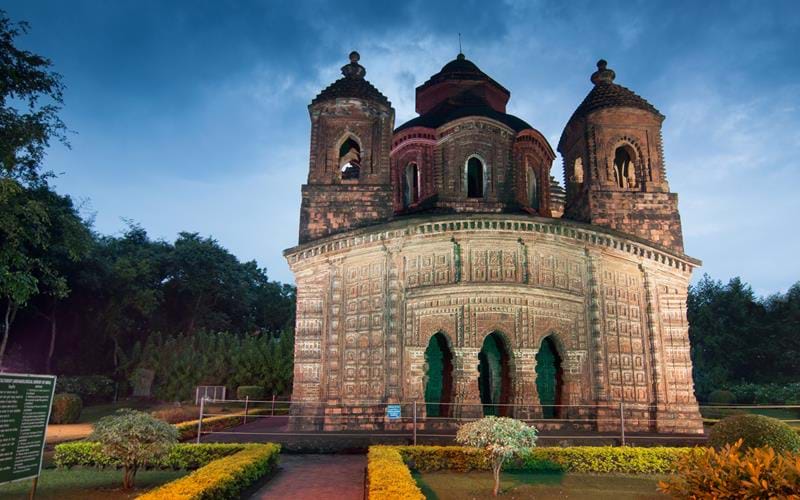 Some of the most beautiful and richly embellished temples in eastern India are to be found 93 miles north of Kolkata at Bishnupur. Although now little known outside West Bengal, th…

It’s not hard to understand why the British chose Darjeeling as the site of an army sanatorium back in the early 19th century. Dense oak and sal forest cloak the high, undulating r… 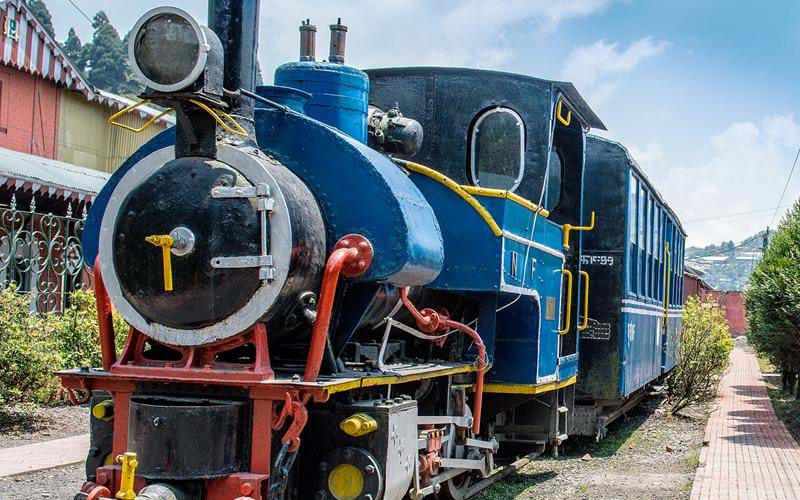 The perfect preamble to any visit to Darjeeling is the journey up from the plains on the 19th century toy train. Steam locomotives still haul some of the services trundling up and… 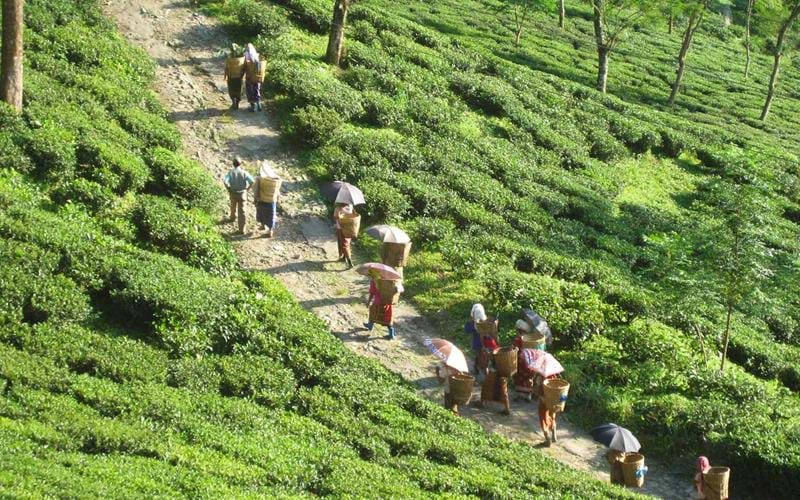 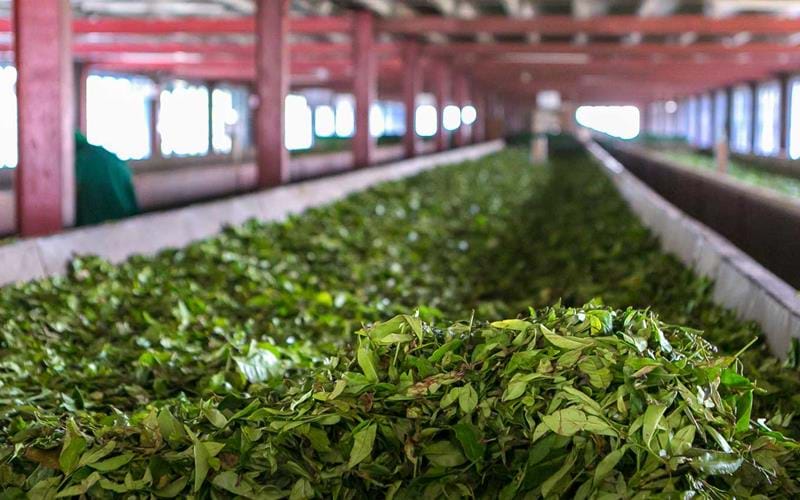 Visit a Tea Factory in Darjeeling

Tea was first grown on the mountain slopes around Darjeeling in the 1840s, since when it has become a multi million-dollar export. In that time the basic techniques and machinery u…

This tour covers all the major sights, including the Valley of Kathmandu, home to the ancient capitals of Nepal and some stunning temples, the national… 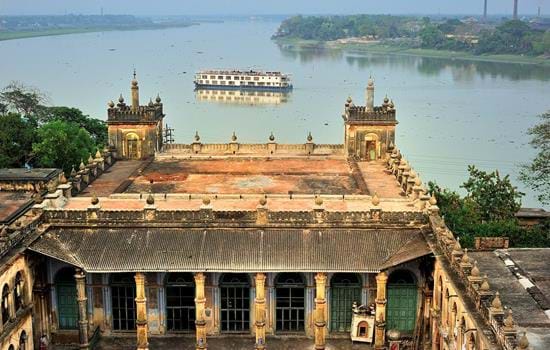 The Hooghly river, a side stream of the Ganges, is dotted with historic sites, from Kolkata at its southernmost tip to Jangipur in the north.… 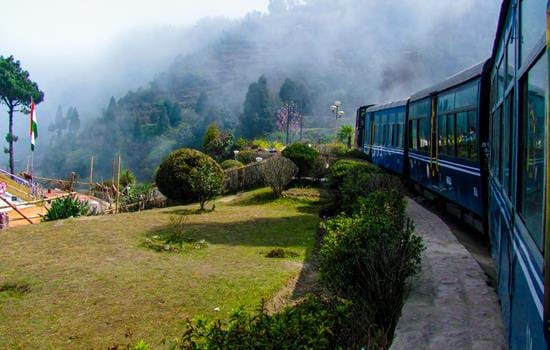 Gaze at the world’s highest mountains from the terrace of an exquisitely decorated Tibetan monastery, or the veranda of a secluded tea-estate bungalow, on this… 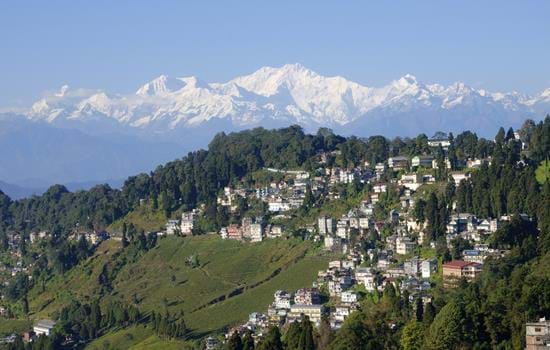