The Sacred Wonders of Asia

As I write, rain is lashing the office window and more storms are queuing ominously in the Atlantic. It seems the much anticipated family camping trip to Cornwall may end up being memorable for all the wrong reasons. But no matter. The Beeb has served up something truly spectacular to sweeten the tail end of summer.

Last week saw the first instalment in a new, landmark TV series entitled ‘Sacred Wonders’. Each programme follows the lives of people who do extraordinary things for their faith, centered around some of the world’s most magnificent religious sites.

Five of the monuments lie within countries covered by TransIndus. I’ve visited all of them, but never, to my knowledge, have we seen these places so beautifully captured on film. Watching the first episode, which features Angkor Wat in Cambodia and the Shaolin Temple in China, I succumbed to a delicious surge of travel inspiration as the BBC’s crews deployed their famous technical guile and story-telling skills to reveal not merely the wondrous scale of the complexes, but the devotion and cultural sophistication underlying them.

This first series of ‘Sacred Wonders’ (let’s hope there are more) comprises three episodes. They all include at least one place we’ve been sending clients to for years, and which feature prominently in our portfolio of group or tailor-made tours. If you’ve visited them yourself, you’ll be enthralled by the way they’ve been represented and fascinated by the insights offered by the individual stories. If you haven’t, you’ll definitely want to once you’ve watched the show!

Here’s a rundown of the featured Wonders, with a few details on why you might wish to add them to your travel tick list, and links to tours of ours which include them.

The next episode airs tomorrow night at 9pm. As you admire the scarlet lacquerwork of the Nachi temple in Japan, standing proud against its sublime backdrop of crashing water, do spare a thought for me huddled over my phone watching on from a wet field somewhere outside Looe . . . 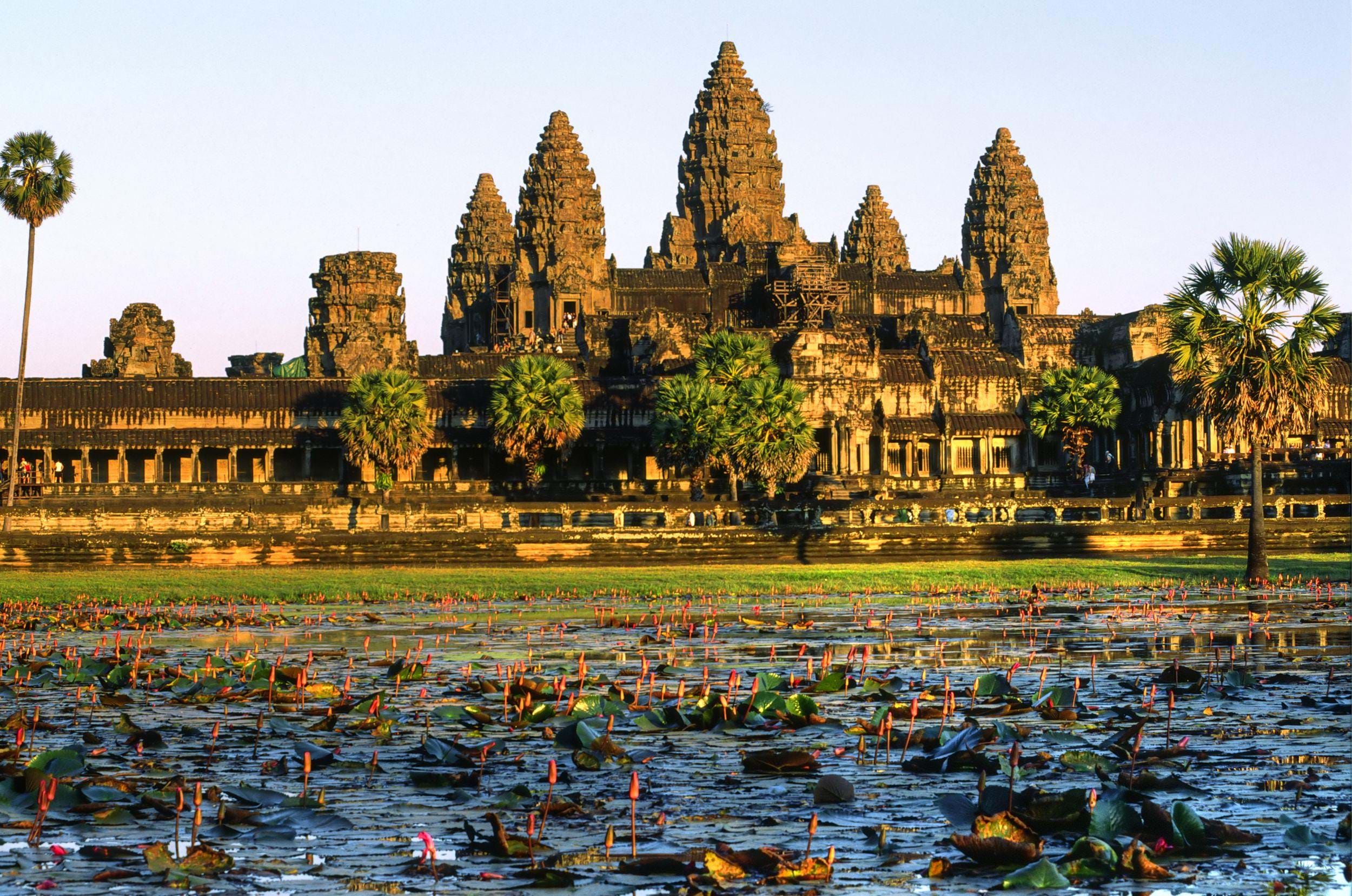 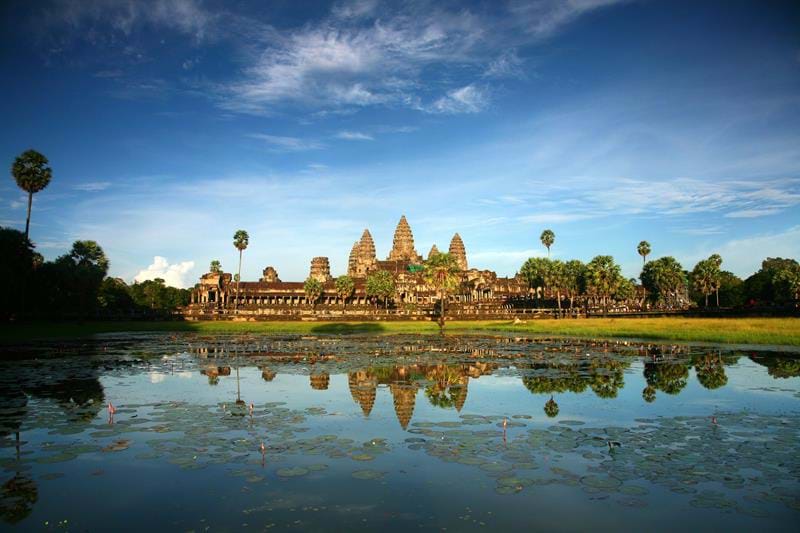 You can’t blame the producers for wanting to kick off the series with the greatest ‘Sacred Wonder’ of them all. Angkor Wat is the most impressive of 70 vast temples which, from the 8th century, formed the hub of a megacity larger in extent than modern-day Paris. Until its rediscovery in the 1800s by French explorers, the complex was completely engulfed by jungle. Keeping the creepers at bay is still a major challenge today, requiring the services of a team of fearless gardeners – fearless because, as the first episode of the BBC series shows, weeding at Angkor can mean free-climbing giant towers on rickety ladders. Anyone who suffers from vertigo may need to leave the room!

Angkor forms the pivotal point on one of our most popular tours of Indochina, which includes visits to lesser known, and therefore less crowded, sites beyond Angkor Wat itself. We even offer a night under canvas at a remote archeological site for anyone wishing to get completely off the beaten track. And of course, our expert guides know precisely how best to sidestep the streams of visitors who pour in to see sunrise over the ruins – one of the most sublime spectacle sacred Asia has to offer.

The spectacular temples of Angkor feature prominently on our tours of Cambodia and our 10-day Classic Cambodia itinerary is perfect for first-time visitors wishing to combine these monuments with the highlights of Phnom Penh. 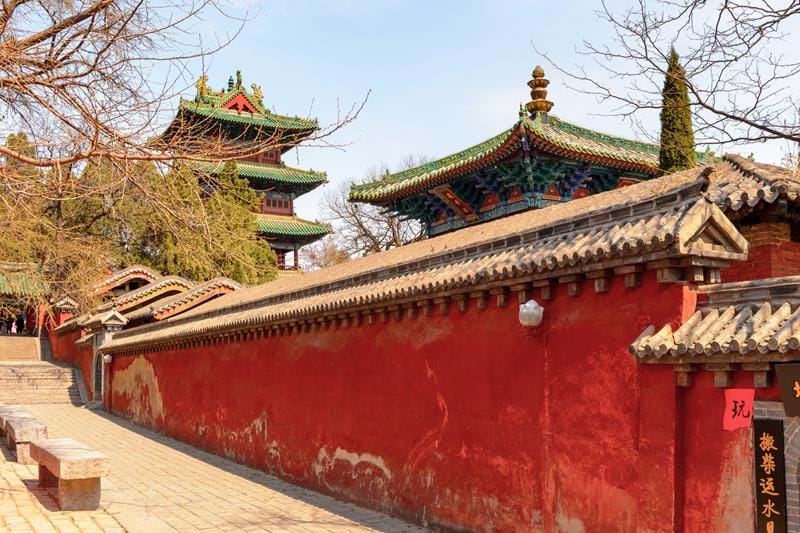 At the foot of Songshan Mountain, the Shaolin Temple has been a revered monastic site since at least the 5th century AD. Today, it’s famous for being the crucible of Kung Fu, China’s most popular martial art form.

As the BBC film illustrates, Shaolin’s warrior monks serve a long and rigorous apprenticeship, culminating in a series of tough exams. Only a handful of novices eventually graduate to the ranks of fully ordained monks, whose fighting skills are legendary across the country. Their fluid moves, refined and codified over millennia, today form the basis of China’s thriving martial arts movie industry. Each day, bus loads of film fans turn up for the synchronized demonstrations performed by Shaolin’s finest, dressed in their traditional robes with the misty ridges of Songshan Mountain rising in the background – an unforgetable spectacle.

The show features on our two-week Ancient Heartland tour of China, along with the Pagoda Forest and Thousand Buddha Hall at Shaolin. You’ll also visit the Ming palaces and temples of Beijing, a prime section of the Great Wall, see the Terracotta Army and explore less well known archeological sites along the Yellow River, among them the fabulous Longmen Grottoes. 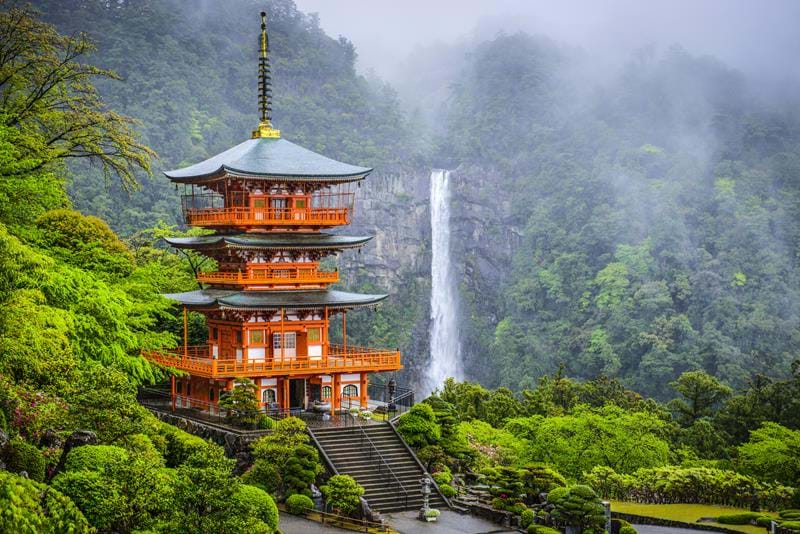 Framed by its backdrop of cascading white water and ancient Japanese cedar forests, the crimson-coloured Nachi Taisha temple ranks among the country’s most iconic monuments. The shrine forms part of the Kumando Kodo pilgrimage circuit, whose ancient paved pathways thread their way through old-growth forests to strings of beautiful monasteries on the Kii Peninsula, to the south of Kyoto and Nara.

Visitor numbers peak in the middle of July when the annual Nachi-no-Ogi Matsuri Festival takes place. Featured in the BBC series, its centrepiece is a procession in which white-robed monks carry six-metre-tall flaming shrines around the complex to purify it.

The best way to explore the area is to join the Shinto-Buddhist pilgrims who follow its holy trails in the summer months, staying in monastery guest houses. But less energetic travellers can, of course, also visit Nachi Taisha on a daytrip, travelling to the temple by bus and train.

For an idea on how the shrine and other highlights of the Kii Peninsula may be tied into a fantastic two-week itinerary, take a look at our ground-breaking Sacred Trails tour, which covers the region in depth with stays in a mix of traditional ryokan inns, candle-lit monasteries and modern hotels. 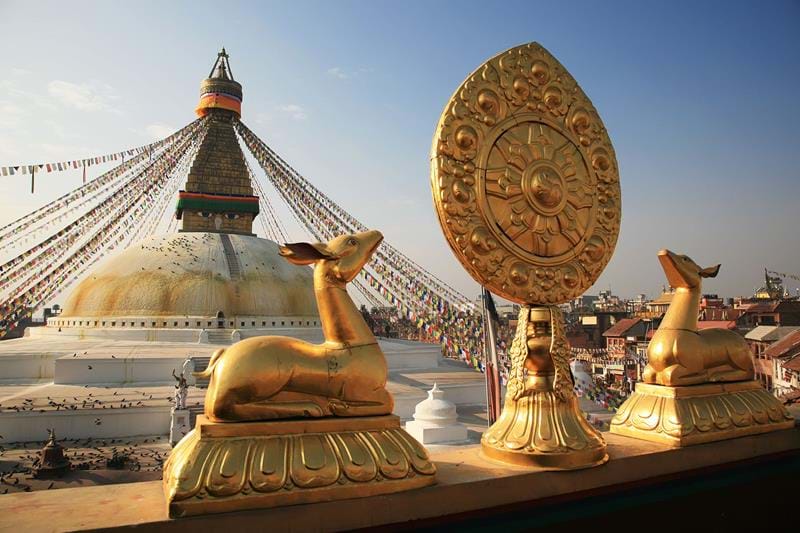 The splendid Boudhanath Stupa rises from the northeastern outskirts of Nepal’s capital, Kathmandu, at a spot where the ancient trade route from Tibet used to enter the city. Tibetan merchants and porters have for centuries prayed here for safe passage through the Himalayas, and the surrounding neighbourhood is dominated by refugees from across the mountains to the north, many of whom may be seen performing ritual ‘koras’ (circumambulations) and full-body prostrations in the brick-paved piazza surrounding the monument.

Crowned with a towering gilded spire, the great white stupa is best known for its ‘all-seeing Buddha eyes’, which have become emblematic of the city. The hours before dawn and dusk, when a cacophony of bells and drums echo through the complex and hundreds of worshippers mill about in traditional clothes spinning prayer wheels and counting mantras on their prayer beads, are the best times to visit.

Boudhanath features prominently on all our tours of Nepal, including our 12-day Treasures of Nepal itinerary, which is recommended for first-time visitors to the country. 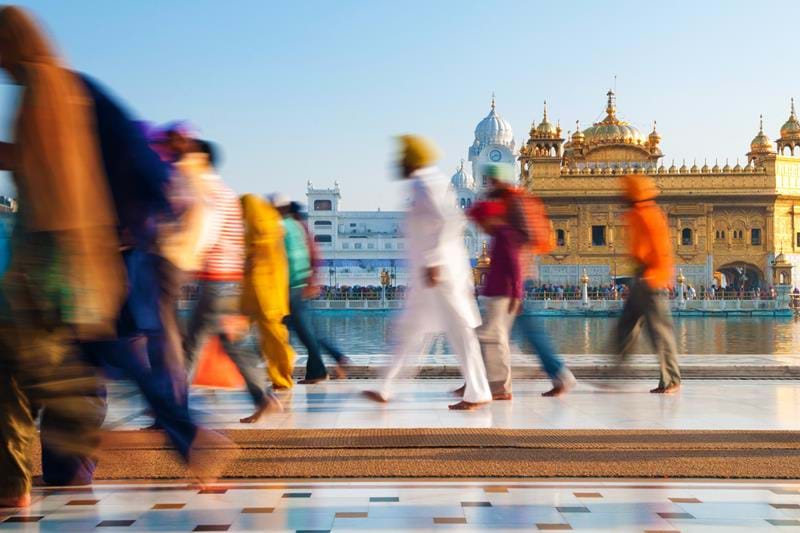 The Taj Mahal attracts more attention, but for me the Golden Temple in Amritsar is India’s most beautiful and atmospheric monument. Why? Because unlike the Taj, it is a living, breathing, pulsating pilgrimage centre, busy all day long with Sikh worshippers of all ages, for whom the richly gilded Hari Mandir shrine is the ‘Holiest of Holies’.

The temple’s gleaming exterior glows an ethereal molten colour just before sunset, when the devotional songs performed by the resident musicians infuse the site with soaring, exotic melodies and rhythms. No visit is complete without a ritual circuit of the Amrit Sarovar pond, on whose waters the main shrine appears to float. Afterwards, make your way to the adjacent canteen, the great Guru ka Langar, for a free meal of delicious black lentil dal and chapatis.

I really can’t think of any other shrine in Asia that exudes such a vivid sense of spirituality and inclusiveness, and always try to tie in a visit to the temple if I can.

Our 14-day Golden Temple and Spiritual Himalayas itinerary includes Amritsar on a wider exploration of the sacred Hindu sites nestled amid the Himalayan foothills of Himachal Pradesh and neighbouring Uttaranchal – a fabulously diverse two-week trip packed with sacred wonders.

If you’d like to know about any of the religious sites mentioned in this blog, feel free to call, email or arrange a visit with one of our team of specialist travel consultants, who will be able to help you knit them into a dream holiday. 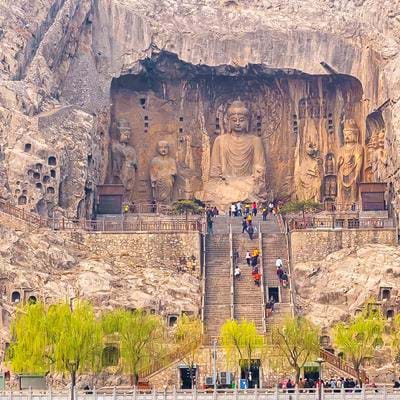 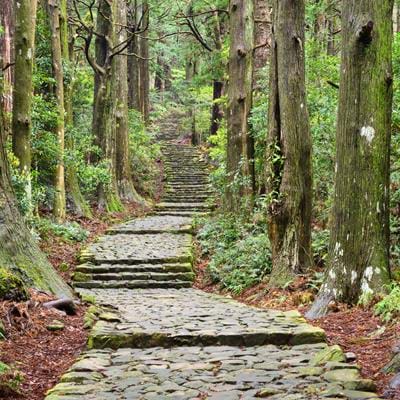 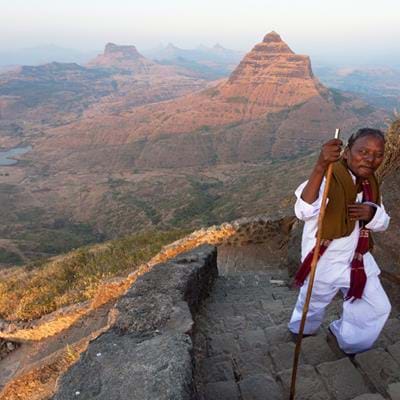 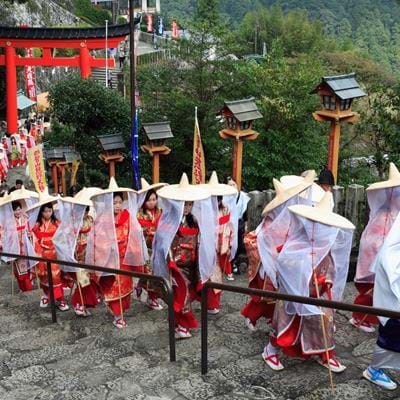 Highlights of Japan's Sacred Trails on the Kii Peninsula 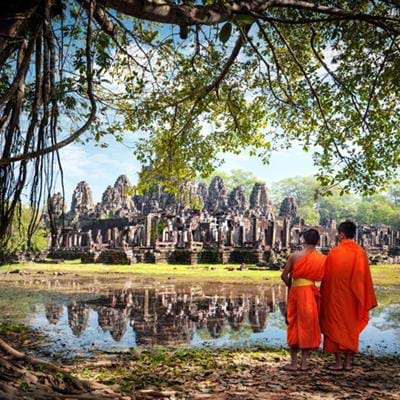